On exhibit through May 14 at the National Cowboy Museum

The goal of exhibition is to share the history of the Spiro culture from its humble beginnings to its rise as one of the premier cultural sites in all of North America.

A nearly forgotten people who created one of the most highly-developed civilizations in the Americas. An archaeological find unmatched in modern times. How did these incredible works of art and other treasures from all over North America end up hidden for hundreds of years, and why?

Spiro and the Art of the Mississippian World seeks to answer these questions and more in the first major museum exhibition on the Spiro Mounds of southeast Oklahoma. It reunites extraordinary objects which haven’t been together since the site was both looted and archeologically excavated in the 1930s and 40s.

Explore the religious and ceremonial activities, farming and hunting practices and daily life of the Spiro people. Learn how a “Little Ice Age” may have led to the site’s ultimate abandonment and what lessons may be learned as we face our own ecological changes today. The exhibition also showcases contemporary Indigenous art pieces that explore the ideas of origin and connect the art and artistry of the Spiro people to their modern descendants.

More than a decade in the making, this nearly 200-object exhibition with companion publication and educational programming were developed in collaboration with the Caddo Nation, the Wichita and Affiliated Tribes, and scholars from over a dozen universities and museums from across the United States. 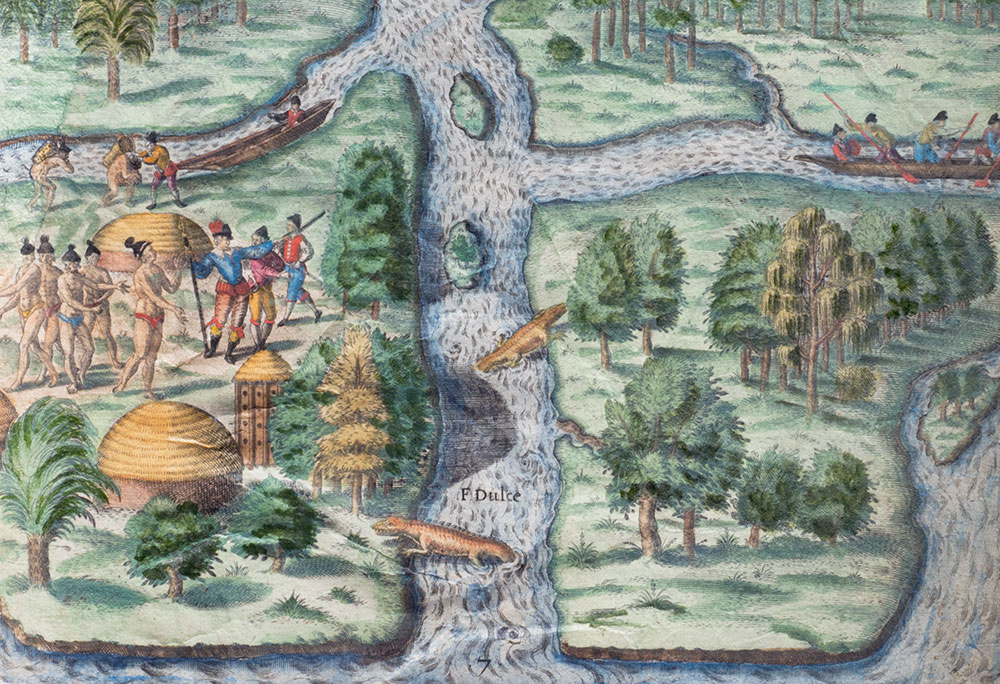 The Mississippian people (AD 800–1650) were the largest and most complex society to develop in the eastern half of North America. Living near rivers in the Midwest and Southeast, they created highly developed, agriculturally based communities that were mostly fortified and contained large earthen mounds and broad plazas. These towns and cities were the center of political, social, and ceremonial life in this period. Like many other cultures in the world, the Mississippians had a ranked society, which included commoners, warriors, ritual elite, and chiefs. These chiefs were often considered godlike by their people, sometimes referred to as the Sun. The economic basis for most of the Mississippian centers was the harvesting of flora (plants) and fauna (animals). Corn, or maize, was the dominant crop, but other plants, whether grown or gathered, such as beans, squash, sump weed, acorns, and sunflowers, played an important role. This plant-based diet was supplemented with large and small game, such as bison, deer, and rabbit, as well as fish.

The overall geographic area of the Mississippian world is subdivided into different regions. The Mississippian people moved and traded between towns and regions by walking or using canoes. Uniting these regions was a common ideology, or belief system. Within this belief system was a unity of ideas that were shared among these geographically dispersed centers, namely that of a trilayered universe with an above, middle, and below world. These beliefs dictated all ritual activities and are depicted symbolically on various ceramics, stone statues, pipes, engraved shell gorgets, and copper plates, symbols seen throughout the exhibition on nearly every object. Many are still used today by multiple Indigenous artists—allowing people to identify and understand this common ideology

Each Mississippian center produced its own distinctive art, which in many instances was exchanged with other centers. Thus, the overall geographic area of the Mississippian world was subdivided into stylistic regions. In the worlds of art and archaeology, the term style refers to the formal qualities of a work of art or an artifact (line, shape, proportion, pattern, etc.). These are the characteristics of an object that allow it to be grouped with similar works. Style analysis of the objects found at Spiro reveals that many objects were imported from different regions across the southeastern United States and probably arrived at the site via a system of interregional exchange. 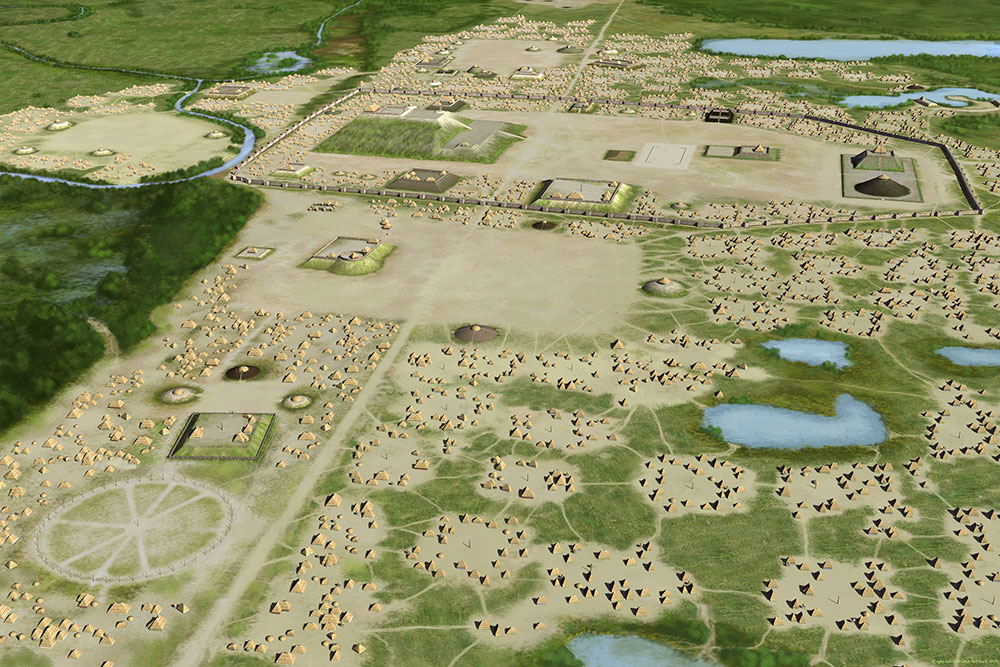 The city was palisaded (walled) and had a large grand plaza that was the equivalent of thirty-five football fields. It also contained the third-largest pyramidal mound in all the Americas. Known as Monk’s Mound, it measures one hundred feet high and took nearly 150 years to complete. The Pyramid of the Sun at Teotihuacán and the great pyramid at Cholula, both located in Mexico, are the only pyramids larger than Monk’s Mound.

Cahokia was also the likely epicenter of an artistic tradition referred to as Braden. Braden is a highly refined artistic style known for its representation of Morning Star and Earthmother as well as its depictions of plants, animals, and humans with references to body painting and tattooing. Objects created in this style are found at other large ceremonial centers across the eastern half of North America—including Moundville in Alabama, Etowah in Georgia, and Spiro in Oklahoma.

Located on the banks of the Black Warrior River thirteen miles south of Tuscaloosa, Alabama, Moundville was established around AD 1000 and rose in prominence to become one of the principal ceremonial centers in the Mississippian world.

The city center was surrounded by a large defensive wall and sat on nearly 185 acres. The largest mound, Mound A, had a base of two acres and was approximately twenty feet high. On top of each mound sat various public and religious structures as well as the chiefly residence. Historical parallels suggest that Moundville was originally built as a sociogram—an architectural depiction of a social order based on ranked clans. Paired groups of mounds along the plaza’s edge were associated with specific clans, arranged according to social power and prestige.

By AD 1300, however, Moundville had undergone substantial change. The population rapidly diminished, the number of burials increased, and the large defensive walls were demolished. It appears the site had transformed from a large population center to a necropolis—a regional repository for the deceased. 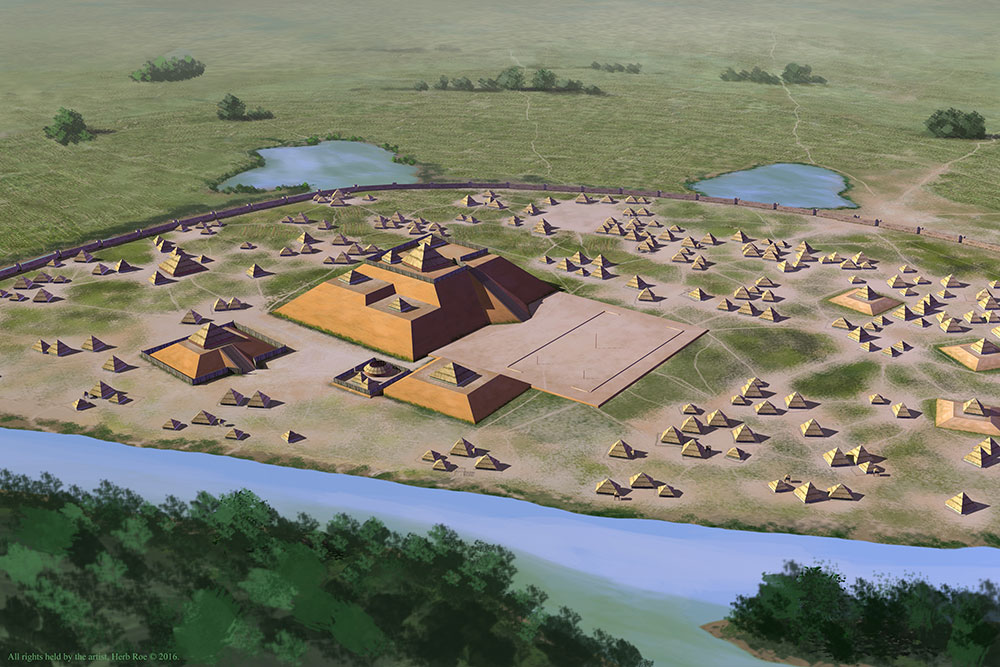 Etowah was a large Mississippian center constructed about the same time as Cahokia and Moundville. It is in present-day Georgia and sits on the banks of the Etowah River in Bartow County, just south of Cartersville. Containing six mounds, it was the largest known ritual center in the region from AD 1000 to –1550.

Etowah is unique because it saw repeated instances of abandonment and repopulation. The first period of abandonment occurred in AD 1200 and lasted for nearly fifty years. It was rebuilt in AD 1250. This period of repopulation is known as the Wilbanks phase (AD 1250–1375). During this time, the site saw the enlargement of previously created mounds as well as many newly-constructed ones. The largest, Mound C, served as the mortuary facility for Etowah’s elite and included objects and iconographic imagery matching other regional styles—namely Braden.

By AD 1375, archaeological investigations indicate that the region was consumed with warfare and the city sacked. Following this, it was once again abandoned for nearly 100 years. When it rose once more, it was under the rulership of a new chiefdom. This new chiefdom was visited by Hernando de Soto in August 1540. During this trek, one of his chroniclers mentioned the Etowah site—referring to it as Itaba.

North of the Cumberland Valley 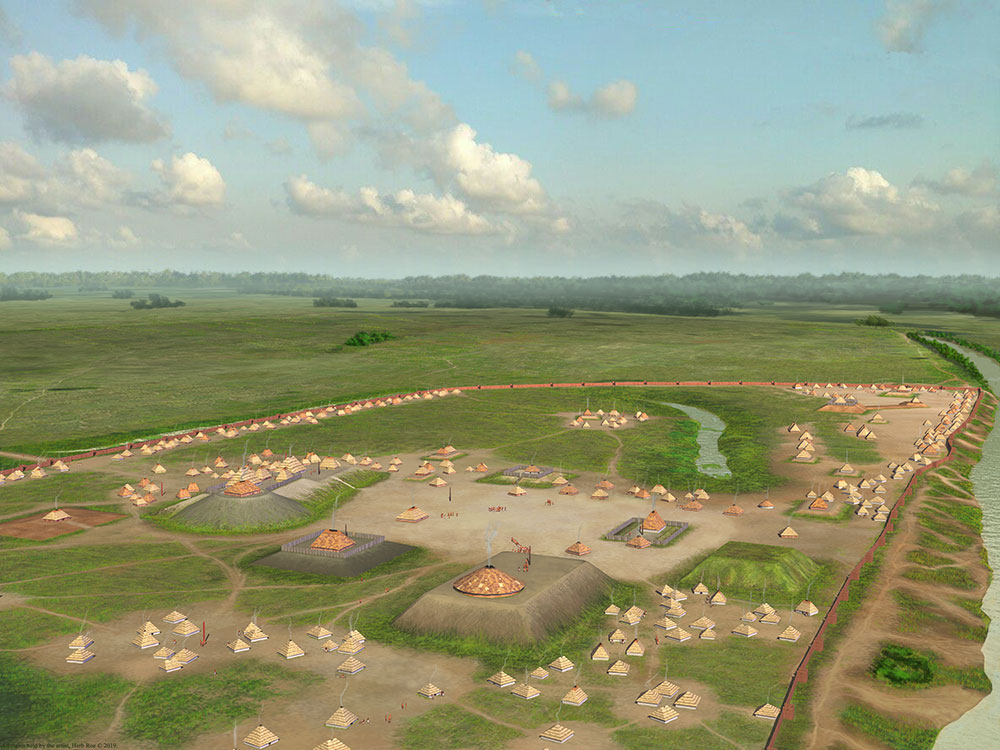 The area known as the Cumberland has one of the densest concentrations of mound sites from the Mississippian Period. The most notable mound site in this area is called Kincaid. Located in Brookport, Illinois, this site contained 19 mounds and was occupied between AD 1000 – 1400. Like the other eastern mounds, it was palisaded. It is believed that this site was the seat of regional politics during this period as it maintained a close trading relationship with Cahokia and the other mound sites in the Cumberland Valley.

Evidence indicates that the most common source of food was deer, bear, elk, turkey, and the eastern box turtle. Corn (maize) was the most harvested plant, but others, such as sunflowers, squash, beans, hickory nuts, and acorns were also utilized. This region had easy access to salt and mineral springs, which made it a powerful trade zone.

Just like Cahokia, Etowah, Moundville, and Spiro, by 1450 the site had been abandoned and replaced by scattered fortified villages. The fact that so many cities and towns were being abandoned gives rise to the conclusion that a common event was impacting every population group. This event was likely environmental and brought on by what is known today as a Little Ice Age. This Little Ice Age would have change weather patterns—effecting temperature, rain, and animal populations. 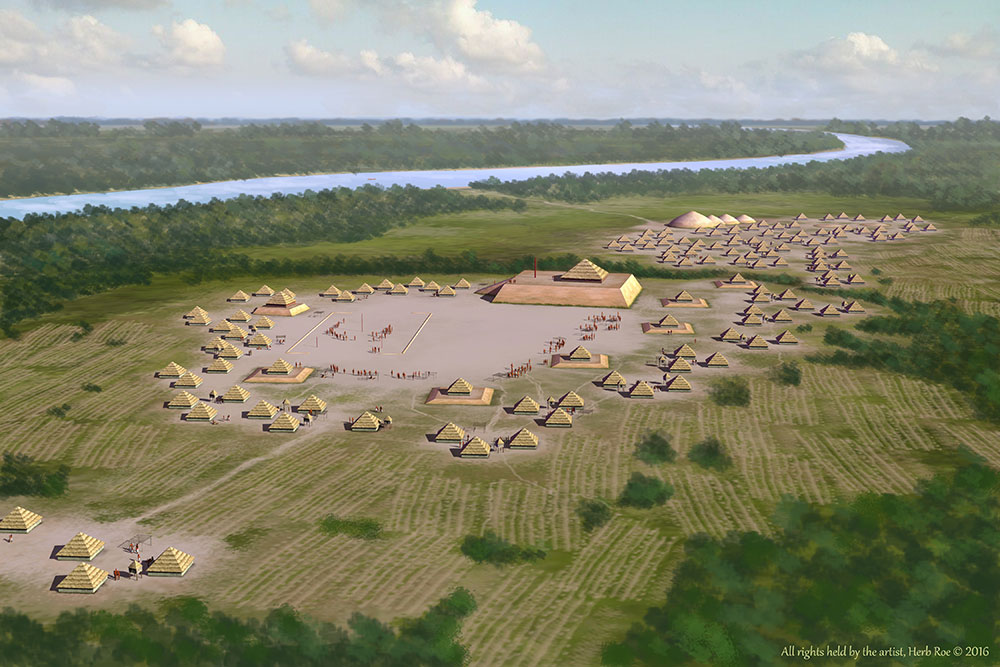 Located in Le Flore County, Oklahoma, Spiro is one of North America’s most important, but little known, ancient cultural and religious centers. Containing twelve mounds and a population of several thousand, it was physically unremarkable when compared to many other North American Mississippian sites. It is not the largest center ever discovered, nor did it have the biggest population. It also was not palisaded, as were the ceremonial centers of Cahokia, Moundville, and Etowah. What made it unique were the thousands of ceremonial objects found in an earthen Hollow Chamber—something not seen anywhere else in North America.

The people of Spiro people relied on a wide variety of animals for meat, including deer, elk, turkey, fish, turtles, geese, ducks, squirrels, opossums, raccoons, and other small mammals. The Spiro people did not rely on maize as their primary cultivated crop like the inhabitants of the other ceremonial centers. Instead, they harvested chenopod (quinoa), maygrass, barley, and knotweed. This was supplemented with nuts and other wild plants.

After AD 1450, the site and region underwent considerable cultural and environmental changes. Artifacts found during this period reflect a major shift and resemble those typical of groups living on the Plains, such as the Wichita. These differences in food cultivation and mound construction often leave scholars defining this region, and site, as Caddoan and not specifically Mississippian. However, it is unquestionable that Spiro shared the same iconography and belief system as the other Mississippian Ceremonial Centers.